One of my good friends and favorite artists released a Motion graphics course for blender an it's amazing. If you ever wanted to dabble into 3D motion graphics and learn from one of the chillest guys I know click here to check it out!

I realized while practicing gesture drawing that usually the model got stuck in my head.
So I figured, drawing poses using photos of interesting models and characters will be much more stimulating

With that in mind I put together a library of images of cool models and poses for people to practice gesture drawing.

So Danny, you reached the insane milestone of 1000 hours of practice on Quickposes, that is totally astounding! Congrats! In this interview I want to talk about your journey over the last years on Quickposes and how your gesture drawing has evolved.

But first, for all the people who don't know you, give us a small backstory about you and how you got into art.

I grew up casually drawing on and off and intensely liking movies, cartoons, comics and games. Fast forward to now, I've been freelancing full time for the last 10 years, primarily creating artwork for tabletop miniature companies as well as some comics projects. It's been a great run so far...

Ok let's get into the real topic, your 1000 hours of practice! Do you remember the first time, or one of the first times you discovered Quickposes? What did you think of it? Did you know about gesture drawing before discovering Quickposes?

It's been a while but I believe I first became aware of Quickposes around 6 years ago. I had already been doing timed gesture drawing at a couple of other places at that time actually. QP appealed to me for a few reasons: Firstly, the images used were mostly different than the other sites I had been using. Secondly, I really liked the easy to use interface and customization. And, lastly, I liked the concept of 'leveling up' to the next level. I think that kind of dangling carrot approach makes the process more fun. 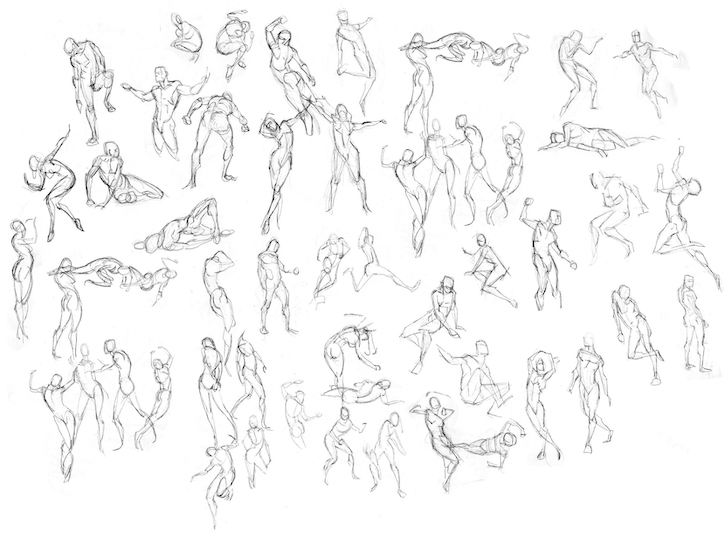 Did you start getting into full force or did the habit gradually build up?

As far as drawing habits, Early on, I pretty much started full on and have maintained that approach since.

What is your routine like for practicing gesture drawing? Do you supplement with real live model drawings, practicing from imagination?

I typically do 20 minutes of 1 minute poses and between 10 to 20 minutes of 2 minute poses. I've been trying to do a full hour lately so now it's 40 minutes of 2 minute poses. But I have to admit, that after about 30 minutes in, the eye/mind/hand connection isn't as sharp as when I start off and a lot of my gestures from then on are heavy handed and aren't very good.
I supplement that with a lot of drawing from life via photos and models, reading and studying from figure drawing and anatomy books. I haven't been to a life drawing class for a few years now, I've just been too busy plus the regular place I was going to changed locations and raised their rates so I haven't looked into any alternatives yet. I don't do much specific practice with drawing from imagination but during the course of a typical week, I produce quite a few rough sketches for client work and those are always done from imagination. 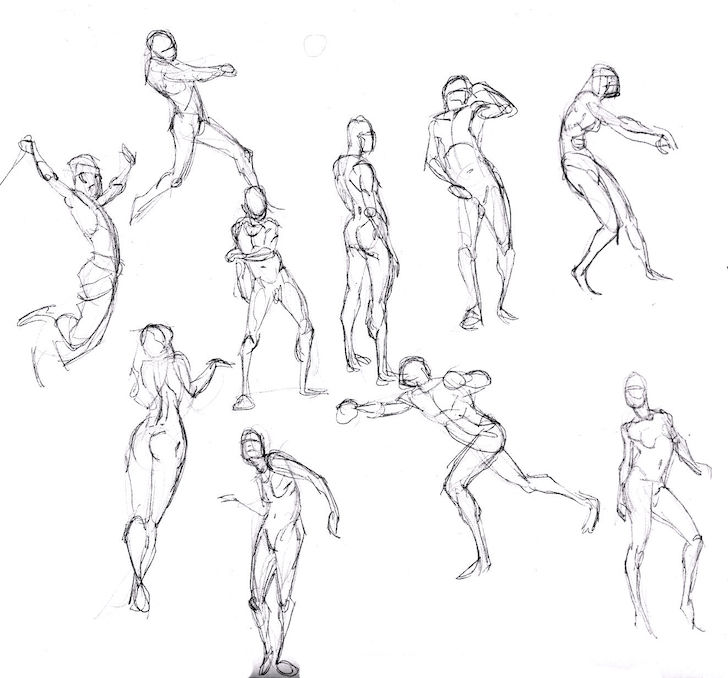 Obviously not everyone is going to do 1000 hours of practice, but is there a certain point when you start seeing definite improvement, do you know maybe at which hour / stage?

I know for sure that thanks to all those hours of gesture drawing, I can pretty easily draw my way through an entire figure in no time. I couldn't say specifically at what point I started seeing an improvement though. Also, aside from skill, I'd imagine doing it day in and day out builds up confidence as well.

How do you feel personally feel about 1000 hours of gesture drawing practice? Do you feel like you have developed a certain flow, style and understanding of human figures? and

I think it's awesome and I like the fact that there's actual tangible proof of that as well. To me gesture drawing has that dichotomy of being an extremely important stage yet at the same time just a means to an end. Using the analogy of constructing a house, you want your foundations to be rock solid before you go on and build something grand on top of that. Same concept here.
I actually do think it has helped me develop flow, style and understanding...specifically in the early stages of a drawing. Where I'm kind of skating around the paper with some sense of purpose instead of wandering around the paper in a kind of nebulous way hoping something sticks. Both approaches are totally valid btw, I just prefer the former for myself. 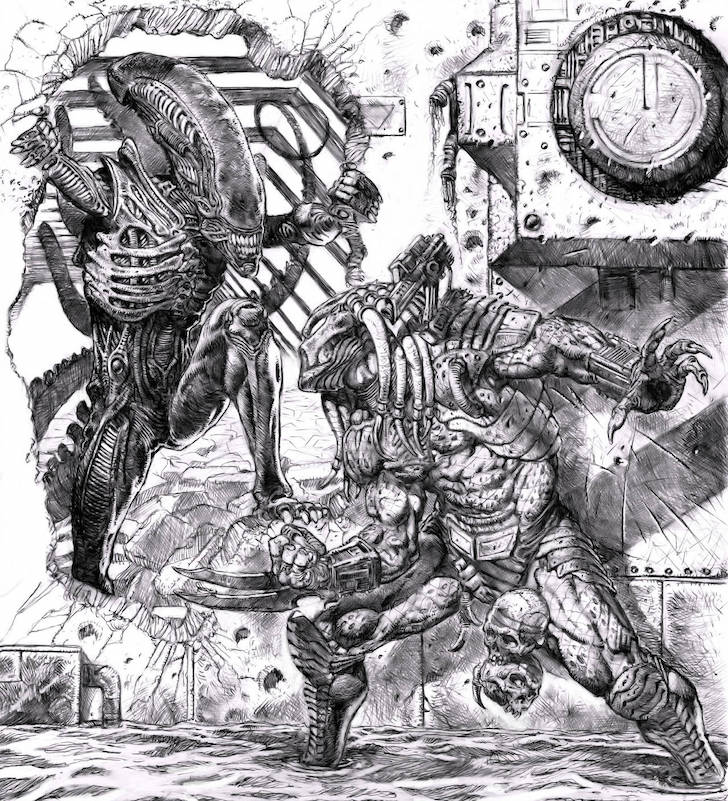 Does your approach to gesture drawing differ from when you started to where you are now?
I altered my approach drastically a few years back actually. Early on, I was using an overhand grip, immediately breaking down the figure with a centerline and a secondary line and building everything out from the torso. These days, using a regular writing/drawing grip, I'll start off with the head or torso and work my way through the figure...basically leading the eye from one point to another cascading through the figure using rhythms. Also, I think my gesture drawings these days don't look as nice as they used to because I think I was adding my anatomy knowledge into the figures early on and these days I have the confidence (that word again) to not be concerned with anatomy when I'm doing these gesture drawings. I can always add structure and build my anatomy on a gesture afterwards. 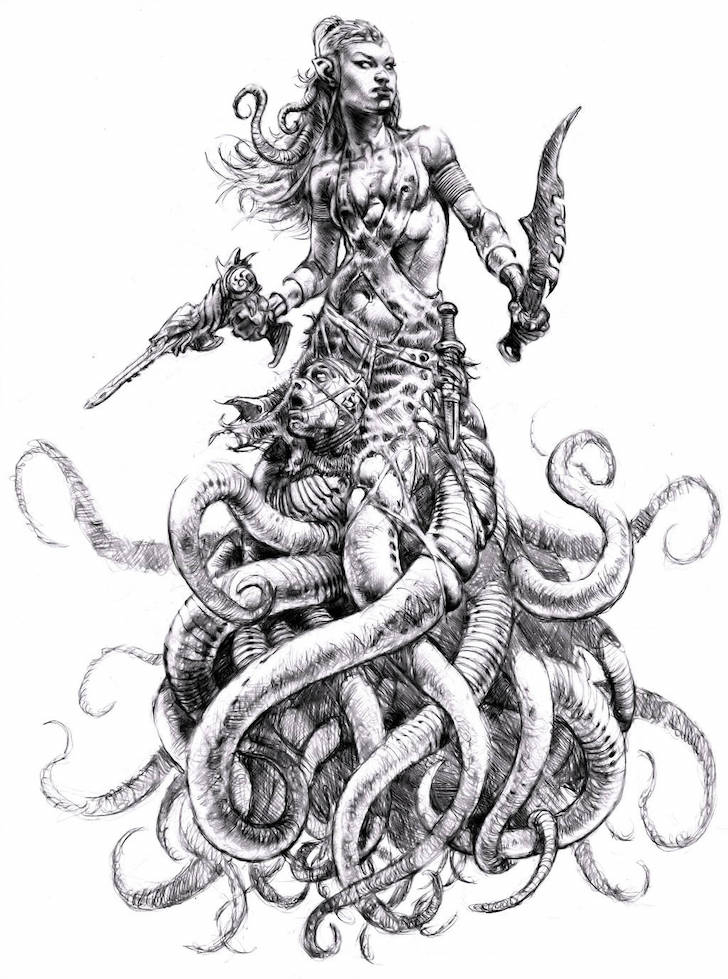 Has this practicing spilled over into your art or other areas of your artistic abilities. if so how?

Specifically, I've noticed all this practice has carried over into my compositions. I'm constantly trying to lead the eye throughout the overall image using rhythms. It's the same basic concept as with the 1 minute poses but with just more going on.

Do you have any practice tips for the people out there who are also doing the grind?

I'd say this: Try to be consistent with the time of day you do gesture drawing also keep in mind, since everything starts as gesture, that you're always doing gesture drawing even when you're not doing dedicated practice for it. Do it even when you aren't feeling it and aren't really drawing well for that session (that happens frequently for me). Don't worry too much about a bad drawing session and/or a figure that gives you trouble. There's always another figure to draw and/or another day to do gesture drawing. So there really isn't any reason to stress about it or let it get you down.

Also, I have to add, doing gestures online is great and everything but keep in mind it doesn't beat doing gestures of actual living people in the real world. I can say with 100% certainty that my gestures of real people in the real world always seem more fluid and alive than the ones I do from online. Although, in this day and age, I feel that a lot of times my gesture work outside tends to be endless variations of people looking at their phones but, that's besides the point lol.

I hope you liked this guys. You can check out more of Danny's art on his DeviantArt page